On the day that Magnus Carlsen won a spectacular game against Nils Grandelius at the Altibox Norway Chess tournament (round 3), the Norwegian wasn’t the only World Chess Champion in the Stavanger Forum. On the stage there were of course former champions Vladimir Kramnik and Veselin Topalov, but there was one more world champ present. In the audience a small Indian boy of only 11 years closely followed Carlsen’s game. At first Nihal Sarin drew little attention, but as soon as it became known that he had won the U-10 World Championship two years ago in South Africa, and took silver last year in the U-12 section in Greece, he was surrounded by chess enthusiasts and journalists. Before he knew it the Indian boy was standing in front of a camera to be interviewed by TV2.

When we talked to him a bit later it was clear that he has become used to attention. Nihal calmly answered all questions and explained what had brought him to Stavanger. He had travelled to Norway after the Dubai Open, where he scored 5 points from 9 games. To his regret he had not beaten any stronger players there, a feat he had pulled off earlier this year at the Open in Cappelle-la-Grande in France. There he scored an International Master norm and for the first time defeated a Grandmaster, the Frenchman Jean-Luc Chabanon. After Dubai his coach had contacted Altibox Norway Chess board member, Jøran Aulin-Jansson, and asked him if he could come to Norway and watch his hero Magnus Carlsen at the Altibox Norway Chess tournament. He was told that he was very welcome and here he was.

The game of Carlsen that he had watched was certainly to his liking. ‘It was a good game, he sacrificed a piece.’ As Nihal plays the sharp King’s Indian Defence, we suggest that he is an attacking player himself, but this meets with a calm and surprisingly mature answer: ‘I play mainly according to the position. Depending on the requirements of the position I will attack or defend or play positionally.’ It’s not the only time he surprises us. When we get to talk about another of his favourite players, the legendary fourth World Champion Alexander Alekhine (1892-1946), he says: ‘I like his attacking style. But nowadays that sort of attack will not work anymore. There is so much theory. At that time there was not much theory, but now there is a lot and many games end in draws.’ To which he adds the reassuring thought that chess is still difficult enough and that there is no reason to fear that all games will end in draws.

Although he wouldn’t mind playing chess all the time, Nihal still goes to school, and if it’s up to his parents he will continue to do so for a long time to come. His favourite subject is math, and yes, he is good at it, but he doesn’t see a connection with chess as people often do.

Nihal’s mature observations about chess say a lot about the seriousness with which he works on his passion. One of his coaches is the Ukrainian Grandmaster Dimitry Komarov. And when he speaks about his favourite chess books he mentions titles for highly advanced players. ‘I like Dvoretsky’s Endgame Manual. And I also like Aagaard’s Strategy books.’
Tough books, for sure, but then Nihal will soon be an International Master. And that’s not where he plan his journey to end. As if it’s a plan that he already decided on several years ago he almost routinely says, ‘I want to get a rating of about 2700.’ And after a small pause he adds, ‘And maybe to become World Champion.’ 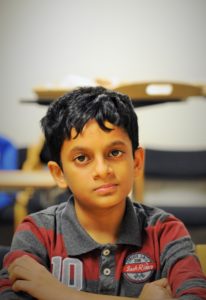 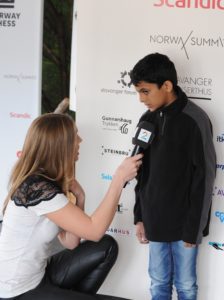