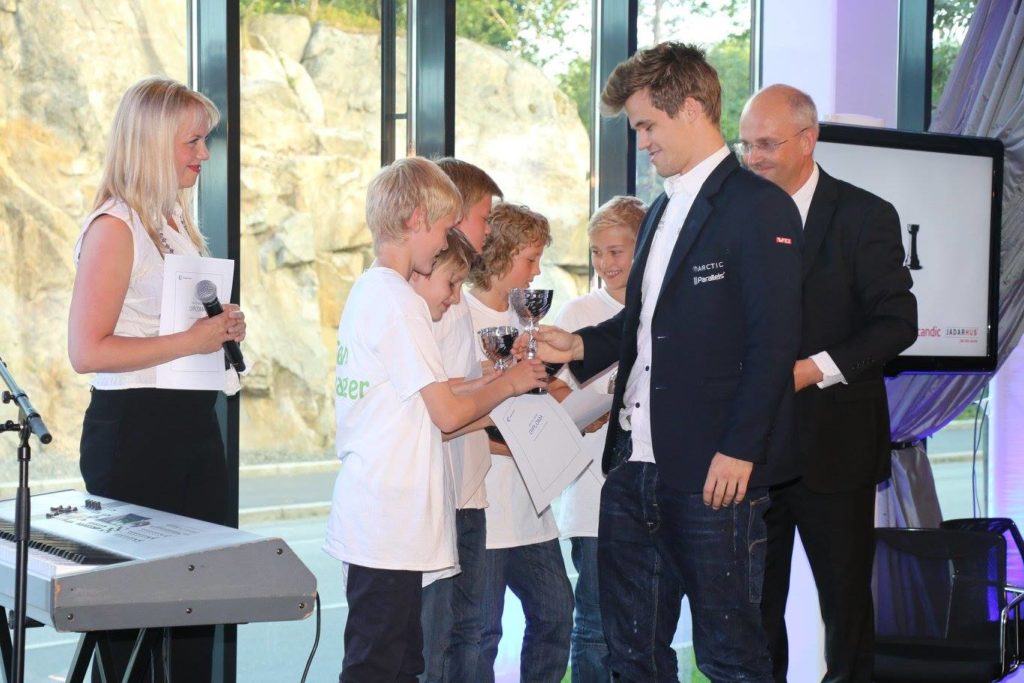 In 2014 Norway Chess provided 1400 fifth graders in the Stavanger region with chess training.

The School Chess Tournament is an important part of the Norway Chess super tournament that takes place in the Stavanger region every year. TV Aftenbladet, the regional web TV station, did a live broadcast of the almost five hour long tournament. We have divided the broadcast and written a summary of the different sections of the game below.

Stig Nilsen from Aftenbladet’s sport section, was in charge of the live broadcast from the Norway Chess School Chess tournament 2014. With him in studio was chess experts Lasse Østebø Løvik and Inge Sandstad Skrondal. In the first video you see Madlavoll School, Nylund School and their teamleder Petter Walsdow, chess enthusiast Carsten Beer Jacobsen presents summer chess, and last but of course not least commentator, historian and author Hans Olav Lahlum is in studio.

Round 1 of the Norway Chess School Chess Tournament 2014 – Hans Olav Lahlum is in studio!

29 schools and 145 students participated in round 1 of the Norway Chess School Chess tournament 2014. Chess commentator Hans Olav Lahlum comments along with Lasse and Inge. In this video you meet among other chess players Benjamin and Gabriella, Erlend and Simen and reporter Kristoffer Madland interviews Håkon from Sandved School about his victory in the first round.

Stig Nilsson, Hans Olav Lahlum and two other expert commentators are in studio. Reporter Kristoffer Madland interviews Benjamin and Gabriella after the first round. We get to see Vaulen School and the team from the school also visits us in studio. When the studio takes a break we get to see images of the players, the team leaders and the parents. Round two starts and among the players are Benjamin and Hannah, Thea and June, and Espen and Marion.

In this video you can watch interviews with the following players: Benjamin and Hannah, Marion and Espen, we also get to see Tjensvoll School and the team from the school is interviewed in studio. Reporter Kristoffer Madland interviews the leader of the school chess tournament Erlend Stangeland and teacher Geir Magnus Sandved at Rosseland School. Hans Olav Lahlum does his last shift in studio this time around and Stig Nilsson interviews the leader of the Smea-school chess Roar Njærheim and the team from Lassa School visits the studio.

The players in this video are Tim and Tobias, Isak and Lennart, Ørjan and Ingeborg, Alisha and Alfred, and Marie and Eirik. The president of the Norwegian Chess Federation, Jøran Aulin-Jansson is in studio along with the regular expert commentators.

We start with an interview with Alfred and Alisha, and the school team from Sunde School is in studio. Principal Arve Sæther at Solås School also visits the studio and follows round 4. The players in round 4 are the following: Nicklas and Ivan, Erlend and ArneGabriel, Christian and Asle Shazil and Sebastian, and Emma and Magnar. In the end reporter Kristoffer Madland interviews Ivan, Nicklas, Shazil and Sebastian.

Round 5 – Norway Chess School Chess Tournament 2014 – Magnus Carlsen is in the studio!

We follow the fifth and final round of the school chess tournament. The players are the following: Omid and Aleksander, Sverre and Jerlow, Nils and Magnus, Torgeir and Andreas, and Fredrik and Julian. World Chess Champion Magnus Carslen is in studio and comments the game between Sverre and Jerlow and is also interviewed by Stig Nilssen. The team from Lassa School wins the tournament and visits the studio.

The players from the Norway Chess super tournament is having a day of rest and Magnus Carlsen visits the studio at the School Chess tournament at the Science Factory and is interviewed by Stig Nilssen, as well as commentating round 5.

See the full list of the scores from the tournament here.