Former junior world chess champion from Norway, Aryan Tari is invited to play in the Altiox Norway Chess tournament and has accepted with great enthusiasm.

“It’s an honor to be playing in the tournament and is truly a dream come true to me. It will give me great motivation to work hard in the months now leading towards June”, says Aryan Tari.

The tournament concept the initial first few years was to invite the top 9 players of the world and 1 wild card player. Altibox Norway Chess has in recent years invited only the top 10 players from the official FIDE rating list.

“We are not going back to the original concept of the tournament, rather making an exception this year. We’ve been following Tari closely and we think he deserves the opportunity to participate. It will be an exciting addition to the field of players, maybe in particular for the Norwegian audience.” – says Benedicte Westre Skog, project manager, Altibox Norway Chess.

Thus far, only the world chess champion, Magnus Carlsen’s participation has been made official. The other eight players will be dropped in January and the next couple of months as the organizers are still in the process of inviting players.

The 2020 tournament, which will be the 8th annual edition, will have a median rating of approximately 2780-2790. Tari will therefore face the world’s strongest players in his first tournament with such high level opponents. In comparison, the Candidates Tournament, where the challenger to the world chess champion, Magnus Carlsen, is decided, will have a median rating of 2770. 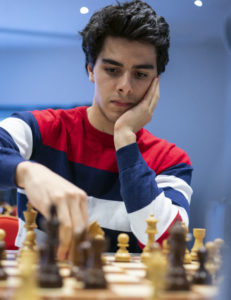