The Norwegian watch brand Von Doren- Fine Timepieces is on a rise these days and we are proud to present Von Doren as Official Timekeeper for Altibox Norway Chess 2018.

Von Doren is the creation of film director and -producer Øyvind Von Doren. He directed the film “The Prince of Chess” and Co-Produced “MAGNUS” both films about World Champion Magnus Carlsen.

The winner of Altibox Norway Chess 2018 will receive a very unique, one of a kind Grandmaster Mark II wristwatch. Serial number 01/01.

This handsome timepiece reflects the game of chess itself – it is a resounding victory born of patience and the application of knowledge and skill.

“I am a big fan of chess. There is the complexity and beauty of the game that fascinates me. Unlike several other sports where you can exercise physically to run faster or lift heavier, chess is a sport that requires a strong intellectual and mental capacity, as well as a good and balanced physique. It’s a game for the thinking individuals and some selected high level games can be looked at as a piece of art. I make watches for sophisticated individualists who appreciate the small details. “

The watch fascination started at the age of 12, when he inherited his great-grandfather’s treasured Swiss watch. In the young Von Doren, it stirred an exceptional passion for wristwatches. Although only a child, he started reading about notable timepieces with a passion. This young boy in his hometown of Aalesund, Norway, was at the beginning of a journey destined to last a lifetime. 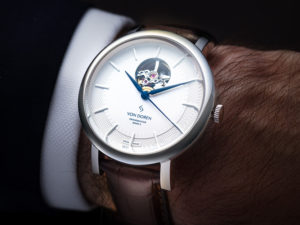