I happened to be in Iceland some weeks ago, for the Reykjavik Open, and in the drawer at my nightstand at the hotel there happened to be a Bible. The rounds started late and I woke up early, so I opened the book and started reading the gospel according to John:

First sentence. John 1.1. First came the Word(!). Then the Almighty created the rest. God needed to verbalize the vision before he created it.

Isn’t this just what we hear the skiers do before big races? They visualize every stick and the whole track and go through the race in their minds before they actually go for the run.

Actually probably every sportsman does just this. They visualize. Over and over again. It may be technical details, but it’s also very much mental preparation for overcoming obstacles that may come in the way for a very big goal. And how much better aren’t you prepared when you’ve been through it before!

Alternatively you may simply open up and listen to those who have lived and done it before. At Norges Toppidrettsgymnas (The Norwegian College for Top Athletes) where I’ve been running the chess department the last 18 years, often former Olympic gold medalists or something drop by and tell their stories, and it’s always interesting!

There are a few things they, the very best, have in common. One is that they’ve been visualizing long before things actually happen.

Ingebrigt Steen-Jensen, who’s supposed to be worth every krone of the huge fee he takes for holding pep talks, speaks about “big hairy goals”. It’s just the same. He imagined Stabæk, his dear soccer club winning the cup final in five years when they were in the fifth division. And they almost made it! They promoted division four years in a row, and a few years later they’d actually won both the cup and the top league. This wouldn’t have happened if the dream hadn’t been visualized and verbalized long time in advance.

I used to daydream when I was little. About many things, but I remember I saw myself being one of the big chess guys having Anatolij Karpov and Victor Kortchnoj and Jan Timman as my big heroes. When I was 16 I beat Boris Spasskij and a few years later I was close enough to the top thinking “if I only trained half as much as the others I could become the very best”.

There was no limit in my mind and my confidence was endless, and the reason for that had nothing to do with realities. I had my weaknesses and so on, but who bothers about “realistic speaking”? I became number 16 in the world at my peak, which is probably higher than I would if I only had the ambition of being best in Norway or something.

No one disturbed my thinking. That’s the good thing about being alone. It’s easier to control your thoughts without having “authorities” telling you things.

That’s the challenge with soccer and other sports where the trainer actually is very powerful. I’ve had some horrible ones, and some really destroyed a lot for me, but I’ve also had a couple of fantastic coaches.

All Norwegians saw what Egil “Drillo” Olsen did with the National team in the early 90’ies, but he also did more than he knows perhaps for me personally. He was my trainer for four years in my local club Lyn, and I remember very well one time he took me to a national match with Norway against someone and Jørn Andersen, the Norwegian striker, scored. I rose up like everyone else and cheered, but Drillo just sat there and said: “You could also have done that.”

Oh, how happy and naïve I was, and the world was under my feet, but at least I did what Jørn Andersen did. I scored a goal for Norway. It’s actually there, some seconds out in the clip. J

Unfortunately realities caught up with me, but the value of daydreaming, visualizing, making big hairy goals, whatever you call it, is invaluable.

Some years later a little boy with an apparent chess talent appeared in our surroundings. It was very obvious that the ambition could be no less than mastering the game completely. All the achievements on the way, like taking part in the elite class in the Norwegian champions at 11, playing for the national Olympic team at 12 or becoming a GM at 13 and so on, weren’t really goals. It was just steps on the way to something much bigger.

Therefore it doesn’t surprise me when I hear Benjamin Ree, who’s made a documentary about Magnus’ whole life that will soon be on cinemas all over the world, it seems, and being interviewed about this on VGTV, saying that he noted that Magnus wasn’t that joyful when he made the draw he needed against Vishy Anand in the 10th game of the match in Chennai in 2013. Magnus had become the 16th World Champion, but he was more thinking about a possible missed win in the final game.

Perhaps because the real goal was much higher?

PS! When I was little I remember my soccer trainer scared us with a horrible hill we were supposed to run up and down ten times after the training. We were dreading for this the whole session through, but when finally the moment came, he instead said: “Lie down in the grass and close your eyes” and then we started thinking we were running rather than actually doing it. “The effect is just the same”, he said.

I prefer things actually to happen though. Talking and just talking is not for me. 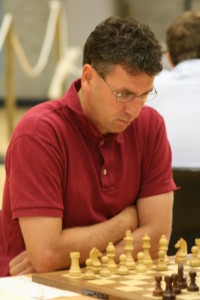