”Hello Magnus Carlsen, what are your expectations for today?” I asked with the TV 2 microphone in my hand, unaware that I had just broken one of the many norms in chess.

You are not supposed to talk with the players before a game, at least not with a microphone in their face and maybe even more importantly stay away from the World Chess Champion when he is about the play a game in one of the strongest chess tournaments in the world.

Sinquefield Cup 2014 was my first meeting with chess as a journalist, and pretty much in my personal life as well. TV 2 had just bought the rights to the tournament in St. Louis, and with only two months experience as a journalist, I was sent on a two-week to the US along with photographer Martin Habbestad. To be completely honest, I had more expectations of reporting back on riots in neighbouring Ferguson, than about chess from St. Louis.

I studied chess pieces, chess rules, chess history and the chess players during the flight from Norway to the US. My only experience with chess was occasional games with my dad growing up and my relationship with chess was dominated not only by fascination, but also bitterness, as the broadcast of the world championship in 2013 spoiled at least one of my exams.

Two weeks in a sunny metropolis in the US can not be that bad, I thought, but I changed my mind quite rapidly when we were put in the ”St. Louis Chess House”. No automatic hotel doors or private bathrooms. Stuck in the American cliché of a house (What is up with wall-to-wall carpets?!) we were supposed to live with other journalists, which, in contrast to us, were very dedicated to chess. To put it mildly, I was a sceptic.

BUT it turned out to be two of the most awesome weeks of my then 24 years long life!

”The Chess House” was next door to the premises of the tournament, and the Chess School, and the Chess Museum, and the Chess Store, and the Chess Pub (chess in the school is great, but chess in the nightlife is now my passion). In Maryland Avenue, which we barely left during our two weeks in St. Louis, absolutely everything we did was encompassed around a 64-squared board game. We followed the world’s best chess players in action every day. We reported back to the chess broadcast team in Norway and interviewed the players after the games. Every night we got chess lessons by the other journalists in “The Chess House” and with a bottle of wine each as our “handicap”, before we got to test ourselves against the local Americans at one of the chess pubs. I think the whole thing might best be described as a nerdy version of an American sorority/fraternity house. I loved it!

We were warned about Magnus Carlsen and that he most likely would refuse to talk to us after the games and I feared that I most certainly had ruined everything with my inappropriate question before the first game. But the Norwegian chess genius did not appear bothered with the inattentive journalist from TV 2. As a matter of fact, he seemed more interested in searching for something to use against Hikaru Nakamura, than to talk about why he did a crazy smart move from e2 to e4. Magnus served headlines to my microphone everyday and I must admit (after studying the whole Wikipedia page about Bobby Fischer) I was surprised how socially astute the world’s smartest guy is.

Chess turned out to be neither an enclosed, eccentric nor boring sport. Hundred times contrary on each point actually. I was mesmerized, not only with the game, but by the community. Magnus Carlsen, Henrik Carlsen (his father) and Bjørn (his bodyguard), which we got to play soccer and golf (Okay, golf was an scheme for the news, which team Magnus turned out to be not too thrilled about), and all the other players, organizers, experts and the journalists. All were so inclusive.

With time, and during my 17 month long love affair with chess, I have gotten to know a community and the players which has still kept its exclusivity and mystery. Chess is a spectacular game, dramatic, both on the board and between the people, which affects its history and present, rivals and duels. The intensity that characterizes a soundless room where to players, centimetres apart, calculates and plans the fall of the opponent.

Finally the show is back in Norway and Stavanger and for the second time I will be a part of Altibox Norway Chess. The Altibox Norway Chess tournament offers both automatic hotel doors and tiled private bathrooms, the atmosphere, unity and the late nights are just as good, or in fact better than in St. Louis.

All questions seem stupid when you talk to the world’s brightest minds, so we just go ahead and do!

See you in Stavanger, 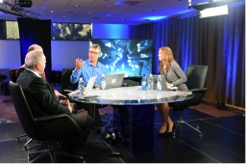