Anemone: There are two arbiters’ titles at the international level: FIDE Arbiter (FA) and International Arbiter (IA), the highest title. To apply for the title of international arbiter, first you have to become a FA, and to become a FA you have to follow a FA seminar, pass an examination and arbitrate some FIDE rated events. Each federation sets its own regulations concerning national arbiter titles. In France, the national training cycle is demanding.  First, I had to pass four national titles before being able to receive the FA title.  If I remember correctly, I did at least 46 hours of theorical courses, passed six exams and arbitrated several chess tournaments. It took me a total of six years (2004-2010) to become an international arbiter. I was very motivated. Today in France, the national training cycle has changed but it’s still very demanding.

Anastasia: I was born in a chess family. My uncle was the first ever Belarusian GM, Viktor Kupriechik. I started playing chess at the age of five, which was at a very early age at that time. As I turned 20, I clearly understood that I can’t became a world champion! But as I always loved chess and I wanted to stay in the chess community I decided to become a chess arbiter. I was entitled the international arbiter title in 2002. A lot of good arbiters are chess players who did not become professional players. And that makes sense, because you know the psychology of the athletes and how they think during a game which in turn allows you to respond to their needs appropriately.

Shohreh: Chess has been at the centre of my life ever since my father introduced it to me when I was nine years old.  I took an immediate interest in the “laws” of chess and other regulations even as a young player.  I would have begun working as an arbiter at a younger age but in Iran you have to be 18. I was attending arbiter courses voluntarily before I was 18 but I was not allowed to take the exam.  When I finally turned 18, I immediately passed the exam and went on to advance through the three national arbiter levels in Iran.  Then I participated in an FA course and I knew right away that this was going to be my profession. It was a defining moment of my life because I had my own chess school in those days and played professionally at the same time. After much thought I decided to close the school and follow my dream – to become a professional arbiter.

WHAT IS THEY FUNNIEST THING THAT EVER HAPPENED TO YOU WHILE ARBITRATING A TOURNAMENT?

Anemone: I remember a joke made by my arbiter colleagues during one of the first individual French championships I arbitrated. These championships gathered more than 800 players. Some of my colleagues filled out two scoresheets with fictional names. Of course, I couldn’t find these players in the pairings and therefore I couldn’t registrate the results. It took me a while to realize that these two players were not playing in any tournament of the championships. We all got a good laugh out of it 🙂

Anastasia: It wasn’t that funny, but it certainly was one of the more memorable things that happened during my career as an arbiter. One famous top grandmaster went so deep into his analysis of a chess position, that he completely forgot that he was in time trouble. Finally, he lost on time, and when I stopped his clock, he was very surprised and said that because the position was just too interesting, he completely forgot that there was a time control at all. I was very impressed how deeply people can enter another world while playing chess.

Shohreh: Besides being an arbiter in big events, I sometimes get the opportunity to arbitrate fun side events as well. Songkran is the Thailand’s New Year’s national holiday and, when I was the arbiter in the Bangkok Chess Open, the organiser asked me to participate in this tradition where we splash water on players while they are playing friendly games.

A FOOTBALL MATCH ONLY LASTS 90 MINUTES. WHAT DO YOU DO TO STAY ALERT FOR SOMETIMES OVER SIX HOURS?

Anemone: During each round, there are critical positions and critical moments when you have to be very attentive. An experienced arbiter can detect these situations and moments, for example when the players are short of time or when you can feel a very high level of tension between the two players. I don’t have any secret to boost my attention span, I just try to have a good night’s sleep and I drink some tea during the rounds.

Anastasia: It really depends on the type of the tournament. During blitz and rapid time is flying that at the end of the day you don’t understand it’s over already. In classical time format you are just deeply following the game and perhaps do some computer work if necessary. But I am a big fan of rapid and blitz events!

FOOTBALL REFEREES USE A SET OF SYMBOLS (GESTURES, CARDS) TO EXECUTE THEIR DECISIONS. HOW DO CHESS ARBITERS COMMUNICATE WITH THE PLAYERS?

Anemone: One of the big challenges is to execute the decisions without disturbing the other chessboards. To communicate with the players, before speaking with them, we stop the clocks.  When a big incident happens during a game that requires to listen to both players’ points of view, then, before making a decision, it’s best to move away from the other chessboards. In my opinion, a very important element of communication in top level tournaments like Norway Chess, is the technical meeting which is set just before the tournament. It’s a privileged moment of dialogue and exchange between the players, organizers and arbiters.  This meeting is also a reminder of the most important of the tournament’s regulations (time control, tie-breaks, schedules, planning etc.). Of course, all the players received the regulations per email several months before the start of the tournament. I used to say that teaching is the art of repetition…I think this expression applies perfectly for tournament regulations.

Anastasia: By speaking with them any by talking care of the chess clocks.

Shohreh: During the game there is usually very little reason to speak to the players, so we only do it when we have to. We do it by speaking to them and take them away from the board to avoid distracting other players who are nearby

WHAT IS GREAT ABOUT BEING AN ARBITER AT NORWAY CHESS?

Anemone: Norway Chess is not only the strongest tournament ever, but also from my point of view the best event! Every detail of the organization is well-planned thanks to the preparation of the organizers and volunteers before the tournament. As an arbiter, it’s also very interesting because the format is very innovative.

Shohreh: Norway Chess is indeed the strongest Chess tournament in the world, so it is the highest honour to be entrusted the task of arbitrating in this prestigious event. Besides, Norway Chess does play a valuable role in supporting women chess by trusting women in their team of organisers and arbiters. Being an arbiter at Norway Chess is exhilarating for me.

WHAT ARE YOU LOOKING FORWARD TO THE MOST DURING THE TOURNAMENT?

Anemone: I look forward to many things especially in this period! I would say the social interaction and arbitrating a chess tournament in real life…it’s so rare since the beginning of the coronavirus crisis.

Anastasia: Interesting games and activities during day off! J

Shohreh: On one hand, I love the energy on the floor of the tournament and on the other hand I enjoy side activities that the organisers plan for players to do.

Anemone is our Chief Arbiter. She became an arbiter 16 years ago and have arbitrated in more than 80 tournaments in France, and in other countries. In Norway, she has been chief arbiter six times in Norway Chess (2013, 2014 and 2017, 2018 and 2019). She is also a French lecturer, one of the 24 members of the steering committee of the French Federation, and she does national arbiter training. She has also been the first female to be chess referee in a competition of “chessboxing”, a hybrid sport where competitors fight in alternating rounds of chess and boxing. 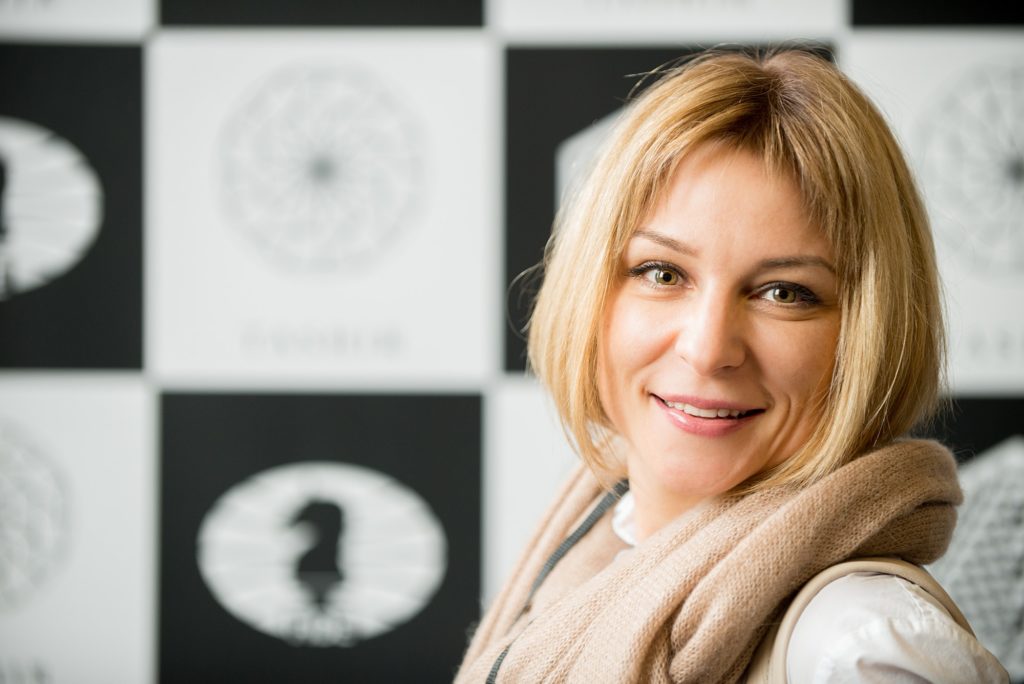 Anastasia holds the Master Title (2001). She became International Arbiter in 2002, and FIDE Trainer in 2005. She was elected as President of Belarus Chess Federation and in 2018 as FIDE Vice-President. She has also been Deputy Arbiter the chess Olympiad, and Chief arbiter at a number of FIDE Grand Prix events, as well as numerous other major FIDE tournaments.